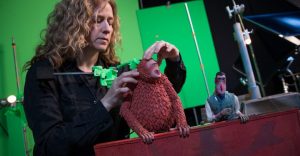 Created by Laika Studios, Missing Link received the award for Best Animation in 2020 Golden Globe. Other candidates were Frozen II, How to Train Your Dragon: The Hidden World, Toy Story 4, and Lion King. Missing Link has outperformed all the stop motion movies that we know with a compelling and challenging technique. The studio’s fifth feature-length animated movie was the company’s most prominent film ever. More than a hundred sets and 100,000 separate masks were used for all characters. The movie takes place in the Victorian era and the creative team produced new fabrics in miniature costumes while using handwork in the design of puppet costumes.

Laika Studios ’approach to animated films has made them different and special than any other studio in the world. Since the release of their first feature, Coraline (2009), they have proven themselves by offering fascinating stories that have been both complex and timeless.

After “ParaNorman”, “Boxtrolls”, “Kubo and Two Strings”, LAIKA reached the pinnacle of their artistic achievements at Missing Link. One of the biggest changes for LAIKA in the past decade is noted as the number of skilled artisans working in the studio.

A short section of an amazing work for those who are wondering behind the scenes of the movie:

Missing Link will be in theaters very soon in Turkey!